Tilt Summer Film Camp is a great place for kids to learn the ins and outs of the filming industry. Not every child will be director, and this camp realizes that with its intensive sessions on everything from filming to final editing. Recently SignUpForCamp.com spoke to Robyn Bykofsky about Tilt’s summer programs, and what families can expect to get out of it! 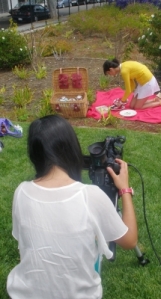 Q: Tell us a little about yourself and how you started the camp

A:  I have been actively involved with TILT at Ninth Street Independent Film Center (participating in its first teacher-training workshop in December of 1999, instructing several of dozens of media literacy/video production workshops, developing curriculum, consulting with the design of TILT’s new website, and now taking on the role of the Youth Media Manager).  Throughout the year TILT partners with community-based organizations.  TILT has been teaching young people media literacy through hands-on video production for over 15 years. TILT’s Summer Film Camp is a newer program, celebrating its 5th year last summer

Q: Are there any special lessons or experiences you are trying to provide during the camp?

A: TILT, the Youth Program of the Ninth Street Independent Film Center, teaches young people the fundamentals of movie making and media literacy through hands-on training in video production. TILT programs empower young people to tell their own stories, to work collaboratively, and to become lifelong learners.  Our summer program allows teens to gain exceptional experience in an intimate setting, with professional filmmakers and educators. Teens have gone on to win awards, with work screened at film festivals, and enter top university film programs such as NYU, UCLA, and USC.

Q: What surprises/delights the kids (or parents) most about your camp?

A: Some quotes from parents whose kids have been to the camp:

I am blogging on all things summer camp.
View all posts by ActivityHero →
This entry was posted in Uncategorized and tagged film, media, multi-media, San Francisco Bay Area, summer camp, video production. Bookmark the permalink.